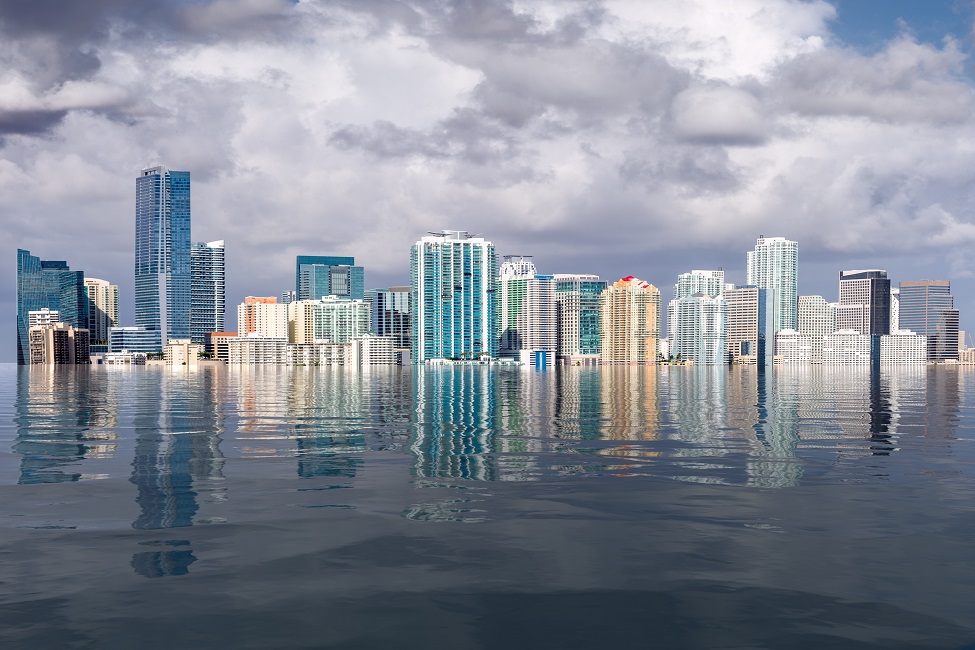 Rising sea levels are only one of the many consequences of climate change. As the global temperature rises, the rate of glacier melting also increases, thus leading to not only higher oceans but also the loss of habitat for many species. As humans, we are not immune to these consequences—we, too, face the sharp reality that an increase in sea levels will put many of Earth’s major cities at risk. Cities such as New York, Miami, Bangkok, and Shanghai are among those greatest at risk, threatening to displace millions of people and extremely important global economic and social hubs. Millions of people are at risk of losing their homes as housing is not adequate to combat these increasingly dangerous conditions. The question is, how are cities responding? What are governments doing to make their cities more resilient against these threats in a way that is both sustainable and economically feasible? The answer: it varies greatly, but the innovation taking place aims to address both the small- and large-scale impacts.

In New York City, there is a current project underway to create a natural reef made out of oysters. Recycled oyster shells are bred in artificial conditions, where larva grows from the shells and their spawn are eventually placed inside large tanks. Oysters that reach the maturity stage are then moved to a reed structure in the New York Harbor (1). These shells are extremely beneficial in more ways than one: they act as a natural breaker for hurricane waves, which can destroy the city’s infrastructure; they act as natural water filtering, each cleaning between 30 and 50 gallons of water a day; they act as a habitat for small fish, similarly to coral reefs (1). This type of natural infrastructure is extremely innovative in the area of sustainable development. It allows us to create a natural environment from something that would otherwise go to waste, while creating a space that is beneficial in multiple ways.

Old River, Louisiana, a town right off of the Mississippi river is a perfect example of this. Old RIver floods extremely frequently, at least once a year, causing its inhabitants to have to take drastic measures to be able to save their houses from the increasing floods. What they devised is a mechanism that allows their houses to float, very similarly to the way rafts do (3). Byont material is placed under the house and vertical poles attached to the house’s frame allow the house to move up and down with the movement of the water. This measure allows the houses to rise much higher than houses on permanent stils, which are normally limited to a height requirement. Innovations such as this demonstrate resilience and an increase in sustainability. They will have the ability to survive for a much longer period of time since they have a greater ability to keep on rising, and thus are less affected by the increasing sea levels.

Moreover, Ijburg, a small district in Amsterdam, has also constructed 120 floating houses (2). The idea of floating houses is not necessarily new either. These are not like the houseboats that have been around for years, instead they are actual houses with concrete tubs attached to their underside, working as counterweights. The houses are also anchored to poles on the docks, which prevent them from floating away. The primary aim of this floating house community was to combat Amsterdam’s housing shortage and to prevent urban sprawl (2). The creation of a community like this one provides a sustainability aspect not very present in current architecture, it allows for easy adaptability and the ability to move these structures to other locations, thus expanding their lifespan and making them highly versatile. One of the designers of the community, Koen Olthius, has a remarkably innovative outlook on the future of cities on water. He sees their flexibility and adaptability as an incredible attribute, explaining how cities could potentially “open to allow for the collection of sun energy [in summer] and… huddle closer together for warmth and energy preservation [in winter]” (2). Furthermore, Olthius argues that incorporating water to cities will bring greater equality, as it has in Ijburg where 30% of houses are designated as government assisting living.

Hearing these innovations,big or small, creates great hope for the future. It encourages others to look into implementing these practices and even goes as far as to inspire future innovation. As an organization focusing on sustainable housing, SHAC  the problems future communities will face, and understands that in order to truly build sustainably, one must to account for what might change, what might push the boundaries of what we have created. Only by doing this, can we plan ahead and focus on fostering resilient cities where its residents aren’t threatened by the effects of sea level rise.